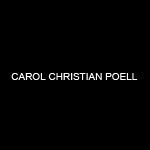 Carol Christian Poell, an Austrian designer who holes up in a studio in Milan's Naviglio district where he quietly designs an ultra-niche, cult label that he doesn't always produce and only shows to the public when he feels like it.

Carol Christian Poell, born in Linz in 1966, lives and works in Milan, Italy. After having been trained as a men's and a ladies' tailor in Vienna (Michelbeurn), he studied fashion design at the Domus Academy in Milan where he also founded the production and distribution company C.C.P. Srl together with his partner Sergio Simone. After having presented his first men's collection in 1995, he developed his ladies' collection from classical elements of traditional menswear three years later. The distribution network for his articles of clothing and accessories, which are quite extravagant in terms of production technology, includes more than 40 dealers all over the world.